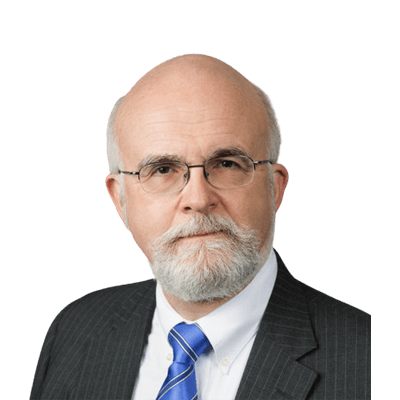 Ken has extensive trial experience as lead counsel in jury and nonjury cases before state and federal courts and before the United States International Trade Commission, as well as ex parte and post-grant PTAB experience in the U.S. Patent and Trademark Office. He has had substantial experience as lead counsel in arbitrations and other alternative dispute resolution proceedings, and actively practices before the U.S. Court of Appeals for the Federal Circuit, having appeared in over 45 appeals to date.

In 2011, Ken was named to IAM Patent Litigation 250 – The World’s Leading Patent Litigators, ranked as a top attorney in the “Individuals – U.S. International Trade Commission,” and, as a Band 1 lawyer in “Individuals – Illinois” and “Individuals – National” categories. He was recognized as a “true leader and luminary trial lawyer” who is “sharp and extremely effective both in federal district court litigation and before the ITC.” In 2012, in IAM’s The World’s Leading Patent Practitioners 1000, he was again named a top attorney in Individuals – US International Trade Commission, and was named to Gold Band Individuals – Litigation in Illinois. In 2013, he continued in the IAM 1000 publication as a Gold Band Individual – Litigation in Illinois, being described as “a ‘brash and bold winner’ who secures superb results for clients.” In 2014 and 2015, Ken maintained those rankings (as he did through 2019), with IAM saying he’s a “Nationally renowned trial lawyer . . . [who] has a tremendous amount of energy and is a commanding presence in the courtroom” and “is a polished trial lawyer with extensive district court, ITC, appellate, alternative forum and Patent Trial and Appeal Board (PTAB) experience.” In 2016, IAM noted that “You can’t be too dazzled by the depth and strength of the firm’s bench of first-chair trial lawyers. Ken Adamo is another big name in the group; he litigates high-stakes cases across the IP spectrum and excels at all levels and in all forums, including the ITC and PTAB”.

IAM 1000 – The World’s Leading Patent Professionals 2017, named Ken as a best-in-class advocate: “Ken practiced patent litigation well before it came into vogue, and has unrivalled experience and a rare depth of substantive patent law knowledge. He takes the time to get to know your business and goals, and will protect your interests zealously. He does a good job training and developing new talent for the next generation of representation for his clients – a lot of senior lawyers take their eye off that particular ball, but not Ken.”

Among his peers, he is lauded as a “laser-focused, high-energy lawyer who does an awful lot of work without ever getting flustered.” In IAM 1000 – The World’s Leading Patent Professionals 2018/2019, Ken was again praised for his courtroom practice: “[Ken] Adamo’s name resonates with the business elite, not only because of its synonymy with trial and appellate excellence, but also its association with integrity, commercial expertise and encyclopedic patent law knowledge.” In 2019, IAM said, “Stationed in Chicago are several major leaguers including… [Ken Adamo], a thought leader who knows where patent law has been and where it is heading and a [sxxxxhuman] trial and appellate lawyer to boot.” He has again been named Individual [ Trial Lawyer ] Gold Band for United States – Illinois for 2022 “, with IAM commenting that “…Few lawyers in the United States have…[ his level ] of strategic perspicacity when it comes to patent litigation, post grant proceedings and ADR.”

The International Who’s Who of Business Lawyers: Patents 2013 named him one of its most highly regarded individuals, calling Ken “‘unparalleled’ in patent litigation.” Who’s Who Legal Patents 2014, 2015, and 2016, named him as one of its Most Highly Regarded Individuals, saying that “the ‘phenomenal’ Kenneth Adamo . . . is widely acknowledged as a ‘frontrunner’ of US patent litigation. He regularly appears as lead counsel before state and federal courts and before the International Trade Commission, and recently acted in high profile infringement cases for clients including IBM, Samsung . . .”

IP Stars Illinois 2017 noted that a peer said that Ken is “a very strong patent litigator and very good in the courtroom,” adding that “even though he has a New York lawyer personality, he does well in the East Texas courtroom,” and, further, that he is “very strategic in how he approaches cases and has a good understanding of the technology so it’s easy for him to simplify.”

The 2017 edition of Chambers USA, America’s Leading Lawyers for Business, ranked Ken Band 1 – Leading Individuals – Intellectual Property in Illinois for the seventh consecutive year, noting that he is “incredibly seasoned, very experienced,” and “has an encyclopaedic understanding of patent law.” The 2019 edition repeated that ranking for the ninth consecutive year, with sources describing him as “one of the best patent trial lawyers in the U.S.” In Chambers Global, The World’s Leading Lawyers for Business 2016, sources said that Ken “brings an incredible understanding of the law and a depth of experience that few, if any, other practitioners can offer.” In 2010, Chambers ranked Ken as a Star Performer in Ohio and Band 1 in Texas, with clients remarking that he “has unparalleled stature as a patent litigator and is ‘incredibly smart with a strong presence that makes him very persuasive to a judge and jury.'” “He’s got the energy, the eye for detail and the courtroom presence – he’s just a superb trial lawyer.”